As a young mum I somewhat expected to encounter a couple of side glances or comments under the breath but the reality of it really did shock me. I discovered I was pregnant after feeling a bit off for a couple of weeks, did a test on the fluke and lo and behold it was positive; I was nineteen and yes, it was a surprise. However, it surprised me how many people asked me ‘are they a mistake?’ when we announced I was pregnant to people. There wasn’t even any attempt to ask, ‘are they a surprise’ or ‘were they planned’ just a straight up, ‘is it a mistake?’ or my favourite ‘are you keeping it?’ I mean, why is it anyone’s business in what circumstances I conceived or whether I was going to ‘keep it’, that is something between my partner and myself. When I fell pregnant I had been with my partner for four and a half years and we were engaged, so I didn’t quite understand why so many people were so judgey but that’s life I guess. So yeah, I did get a bit rude with people who felt the need to ask unnecessarily intrusive questions but hey ho, I regret nothing.

I think my favourite experience was on a day I was feeling particularly hormonal and fed up, I was walking to my 38-week midwife appointment and a snotty looking older woman walked past me and said, ‘there goes another teenager and baby my taxes are paying for’ and I was just so taken aback. For starters she did not know me from Adam so how she felt she had the right to pass judgement was beyond me. She didn’t know the circumstances in which I fell pregnant or what circumstances me and the baby were going to be in once they were born, so who gave her the right to make such a rude comment? For the record, I haven’t taken a single penny in benefits or a handout from the government, my husband and I have supported ourselves and paid our own way, but even if we hadn’t, I don’t see how she felt her comment was at all needed. So, on this hormonal day I turned, stopped and told her so, ‘not that it is any of your business, but your taxes will not be paying for neither me nor my child and you should really keep your opinions to yourself.’ You may think I was rude and maybe I was and maybe I was just sensitive because I was fed up of all the looks and assumptions, but hopefully she didn’t make another young girl feel uncomfortable and guilty for being pregnant. Having a child is not something anyone should be made to feel ashamed of, it’s a beautiful thing and I think sometimes other people get too caught up on the whole ‘teenage pregnancies mean benefits’ crap. Being a mum on benefits is absolutely nothing to be made guilty or ashamed about and noone should be made to feel that way. No matter how we support our children, the most important thing is that they are happy, healthy, have a roof over their heads and are fed. If a mum didn’t take benefits and was in a homeless shelter or couldn’t feed her children then everyone would be the first to judge them for that. So how about everyone stops the whole ‘mums on benefits are sub citizens’ and treat everyone with kindness, love and respect no matter what their situation.

Once Aria was born, I was scared to leave the house. I did have postnatal depression which did make it hard for me, the paranoia that accompanied the depression probably didn’t help either, but it felt like whenever I did go out I was judged. I’d get a look or a tut or something small because I left the house without make up on and may have looked a little worse for wear, or Aria would be upset because she was tired or uncomfortable because she was on the wrong milk. When I did brave a baby and toddler group, all the mums looked at me and watched how I interacted with Aria but not one introduced themselves unless I did first. I felt like an outsider and not one of them even attempted to make me feel included. I remember going to a baby class and all the mums were in a circle and they didn’t move to allow me to sit in, it wasn’t until the woman running the class asked them to move up, that they acknowledged my existence. I didn’t go again. That probably didn’t help my PND as I felt guilty and I felt like I was failing Aria; she deserved a mum who fought to be included so that she would be, she deserved a mum who took her out and got involved. But she was stuck with me, so instead I made sure we went for walks, we had little coffee dates just the two of us and as I got help with my PND I grew braver.

I went to another baby group and the mums had already formed their clique and they again were all older mums, but I made myself introduce myself to everyone, I sat among them and I made sure I was heard. I never became friends with them, however after the first week they didn’t look at me like I was young and inexperienced, they looked at me like an equal. It was at that baby group that I realised that to overcome other people’s judgement that I had to act like there was no reason to be judged. I am a young mum but so what? It doesn’t make me any less of a mother and let’s face it, no one is a perfect mum. Whether you’re 30 and on your first child, 19 with your first child, 27 with your third child, we are all stumbling our way through motherhood.

Basically, I’ve experienced some proper bitchy and judgey mums and I’m making it my mission to make sure I don’t make anyone feel the way I did. I will call everyone and anyone out on their ageist bull crap when it comes to being a mum, we should be building each other up, not tearing each other down! So, to every mum out there, no matter how old you are or how grown up your kids are, be strong, be kind, be supportive and call out people being rude and judgey because how would you feel if it was you?

This site uses Akismet to reduce spam. Learn how your comment data is processed.

Becoming a mum has taken me on an unexpected, beautiful but messy journey and I wouldn’t change it for the world. My two daughters have taught me more about myself in the last two and a half years than I learnt on my own in the first 20 years of my life. Therefore I’d like this space to be a place where I can be honest about our struggles, share our triumphs and maybe learn a few helpful parenting tips along the way.

I’m 22, I’m 5ft8, which can be a pain in the rear when trying to clothes shop not online, I suck at cooking but rock at baking, so if you see any meals on here, thats probably the husband! I’m a stay at home mum, so get the delight of all the cuddles, kisses, demands and tantrums. But when I do get a moment to myself, to be Paige and not Mum (which is extremely rare) I like to read or binge watch something in my PJ’s with snacks, I like snacks.

He’s 21, 6ft5, which makes shopping even more difficult, even online! Dan absolutely adores cooking, playing around and perfecting recipes and would love to own a little restaurant one day. Dan is into football, he supports Arsenal and therefore I seem to hear Arsenal TV everyday and he’s forever reading Sky Sports on his phone (drives me a little nutty).

Aria is Two and a half years old and I’m not sure how tall she is but she is tall, everyone thinks she’s older than she is, bless her. Aria loves playing outside and going for walks, no matter the weather. She’s a little obsessed with animals and always asks to either go and see them at the farm or zoo, or failing that, watching a David Attenborough documentary. She’s super cheeky, sickly sweet and so loving; she’s a picture of perfection, until the tantrums ensue. 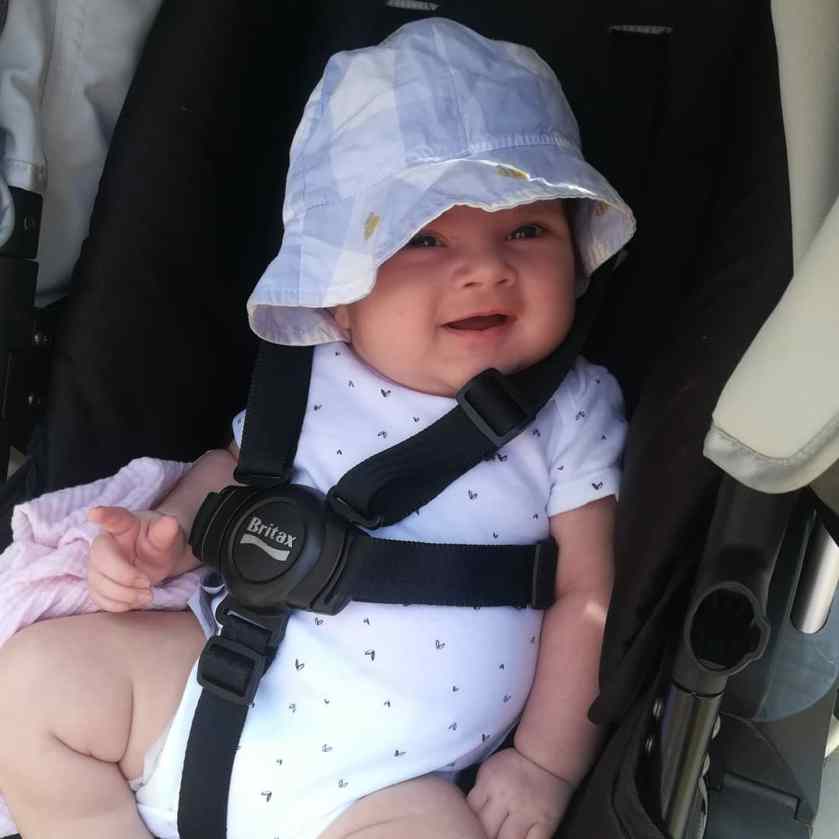 Isla is 10 weeks old, so not really too much I can update you on as of yet. She is a super smiley little lady but she’s also pretty windy (Maybe the two really are related?) She loves being outside, always smiling and gurgling until she falls asleep, which is pretty often. She doesn’t particularly enjoy letting me sleep at night, but that’s babies, so I guess I can let her off because she does give some of the best cuddles.